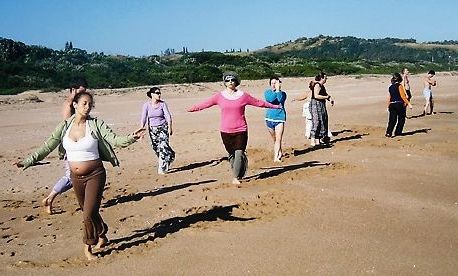 Often, when telling peeps what I do in terms of my healing work, they respond with an obligatory raised eyebrow and, sometimes, the screwed up what-are-you-on -about face. So, I have decided to use this space to explain what I mean when I call myself a Transformational Therapist.

To start, I used to refer to myself as a Massage Therapist. My business cards still flaunt that label. But, while this title might make more sense to some, it doesn’t fully capture what it is that I do and offer. I am not a masseur. I am a healer.

The best way to fully explain the level of healing and type of therapy offered through this work is perhaps to start by giving you a bit of background on Kahuna massage.

Kahuna massage is based on a traditional Hawai’ian bodywork, called Lomi Lomi, which was practised by the Island shamans (or healers). These healers were referred to as Kahuna Lomi Lomi, the word Kahuna really meaning an expert in their given profession. So, in Hawai’ian culture, you would have the, for example, boat building Kahuna, the herbal medicine Kahuna, perhaps even a surfing Kahuna. We, as South African practitioners, have come to use that term as the name for our adapted healing practice.

The Hawai’ian shamans used their arts to balance, heal and transform. An integral part of healing and growth, this bodywork was given to tribes people aiding them not only through ill health but also through their various rites of passage, such as puberty, and marriage, pregnancies.

Rites of passage that are still very valid in our own society. The problem with our Industrialised way is we, as a society, have lost a lot of the sense of the community that was strong in tribal cultures. For example, a young mother of then days was not forced to have to deal with her new situation on her own. She had the support not only of her immediate family but of the entire tribe or community. She would be guided through the process by elders who have been there before and who had themselves been guided.

The healing treatments of Lomi Lomi Nui (a specific form of Lomi Lomi) were also used to aid the young woman mentally, spiritually in addition to physically through her change and helping her adapt energetically. A session may last over an entire night, using combinations of dance, breath, chanting and, of course, massage to assist the woman in her transition. All this is done with love and respect. Anybody who has experienced massage of any form will testify to how good it feels to be touched. This is simply because our society, for the most part, does not encourage touch outside of a sexual nature.

And so, referring to Kahuna massage as the art of loving touch, which it is, raises even more eyebrows.

Until, that is, it is experienced. It can be difficult to describe the process in words, especially since it is very individual for each person.

That is one of the beauties of Kahuna. It is not constant. The nature of the treatment is dependant on what the client needs at that very moment. One day it may be very soft, gentle and nurturing. The next it may feel like you have been pulped through a meat grinder. But it will never be more than the therapist and the client can handle together.

So then what can Kahuna offer you?

Well, apart from a fabulously relaxing massage, the treatment is designed to facilitate and assist with change. It is also incredibly balancing. I often refer to Kahuna treatments as psychological session without the psych. As a therapist, I am trained to read and understand the body. Everything that happens in one’s life can leave an imprint. Psychologically, this mark is best read in the body than attempting to retrieve it through discussion, primarily because often, mentally, we aren’t even aware that such an imprint exists.

Every emotion held, every memory, anything that in some way holds you back can be dealt with through Kahuna sessions. The beauty of Kahuna is it isn’t a mental process. The aim is to bypass the diversions of the mind and get straight to the source of any issue.

That’s certainly not to negate the mind, and discussions are always welcome. I like to leave time before and after a session for a verbal consultation. But, the treatment does not pivot on the verbal so much as the bodywork.

How does it all work?

Ultimately, it’s energetic. I am able to feel blocks in a person’s energetic fields as I work on them. I can then work to release those blocks which in turn break limiting habits and returns the client to a more balance level of being. This may not all happen in a single session but over a few weeks or months of regular therapy.

I am also trained to physically read the body and decipher certain signs. A simple example would be a man with a bit of flab around the belly. Often, the situations causing him to pack on some fat as well as his body’s tendency to hold on to it is a result of him holding on to emotions that are not serving. This may not make sense to somebody who is very mental and believes only in what their physical senses make out for them, but, from a holistic approach, an energetic viewpoint, it holds true. As this man’s therapist, I would work around his belly assisting him to let go of whatever emotions he holds there. During the session, he may release through crying or screaming or rage. It really depends on what event (or chain of events) caused him to feel he could not openly express whatever it is has now lodged itself in his body. He may not even make a connection between any specific event and his venting. That’s not necessary for the treatment to work. All that really is required is the venting.

Once the floodgates are open, the man will realise a change in his habits, in his body, in the way he feels. More than likely, he will not be attracted to foods that would sit around his middle, his body will more easily break down and excrete excess fats, and he will certainly feel a lightness, a sense of having dropped a weight (in this case both physically and mentally) that he’d been holding on to.

There are many ways to rationalise the process and, for some, rationalisation is necessary. It doesn’t matter. The point is the treatment works, whether it was energetically or simply a matter of changing ones physical habits, or perhaps, a combination of both. As long as my clients are growing and letting go of issues that hinder them, regardless of what those issues are and regardless of whether they consciously recognise them.

The clients who have experienced a Kahuna treatment will testify to experiencing a contentment and, often, an elation during and following the treatment. If done with respect, both for the art as well as for the client, it can be a very sensual, loving experience. It offers a sense of nurturing that isn’t openly accepted in common society. It gives many a space to drop their guards, shed their worries, their problems, and to be themselves.