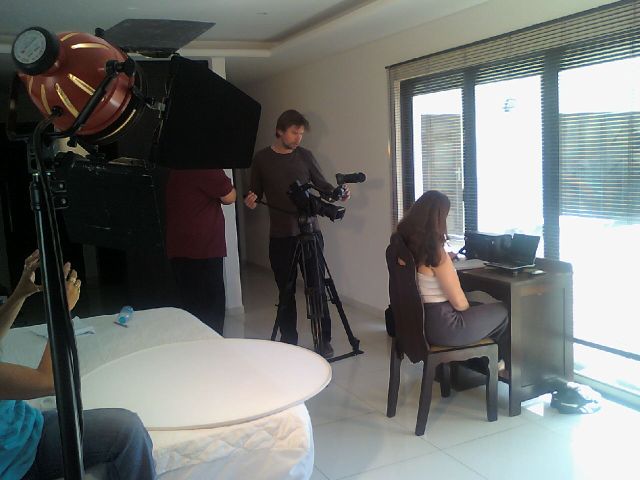 I’ve been involved with a friend’s production since end of last year in which he wrote a me in as the lead character. It’s a very different role to any I’ve since played, being very dark, religious and abusive and not at all in line with what most have come to know as the normal me. I will admit that it did take me a fair bit of time really getting to grips with the character and allowing him to become part of my psych.

We were scheduled to shoot the movie this weekend past but, as it goes with these things, shooting has been delayed by a month and we, instead, used the weekend for a technical run.

It was our first time at the actual location so we, as cast, had to get to grips with new and slightly different blocking to what we rehearsed over the previous months. It, of course, didn’t take long to get the feel of the new venue; Pretty much the entire movie occurs in the one room.

We did some dry runs through the morning before breaking for lunch. Everything was fairly efficient with minimal arbing around. We got some nice shots of both myself and my leading lady, Luisa de Kock, confronting each other. In fact, I started to really get into my character as the run progressed, adding little elements that make him far more horrifying than we’d initially envisioned.

The location itself, a private house in the Houghton area, was fantastic. Large rooms ensured we had more than adequate space to set up equipment and a quaint pool outside the bedroom meant some feet splashing time when I wasn’t needed. Which, it turned out, was pretty much the latter part of our afternoon session.

Well aware of the “hurry-up-and-wait” scenario that occurs on most shoots, I did have the foresight to bring my little netbook along so I could be productive in my periods of non-being-needed. Sadly, the little guy was kidnapped as a prop leaving me to twiddle thumbs sitting in the pool while the scenes with just Luisa were shot. Due to minor technical issues with lighting and trying to achieve the perfect reflection of my “wife” in the window, these shots did go over time.

All in all, though, it was a very productive day. We got some nice footage. I was really impressed with the quality. We’re shooting HD so every little pockmark shows up in all its glory. And, performance-wise, I felt that both myself and Luisa really brought out the best in our respective characters. I am slightly concerned about the delay between now and our actual shoot. My thinking is we’ve got everything in order, the shot-list so far as I know has been locked, our characters are developed and aching to be unleased, we should get everything shot as soon as, before the energy wanes.

Given the independent nature of the production, there may be a practicality aspect of securing both location and crew in the near future, and, granted, a month delay is not long. I just do feel that once the momentum is going, you should roll with it.

But, alas, such is the way in the South African independent movie industry. At least, from my experience thus far.