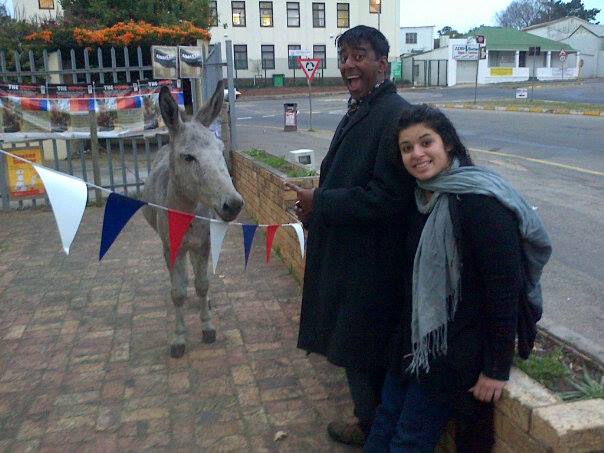 The festival is over and I am no longer in Grahamstown. The last couple of post-fest days spent in town were very chilled, catching up with friends and just decompressing. I do regret not eating enough brownies while I could. That said, some would say that a brownie every second day for a week is more than enough for anyone. I might argue this.

Then there was the matter of the Kartoffels, which were the hit fastfood item at the Village Green with queues often trice the size of neighbouring stalls. This year was my first experience of this deep-fried potato bake. They are basically pancakes made from shredded potatoes, mixed with an array of spices, onions and flour. The final product is eaten hot with a range of sauces, my favourites being the olive, and a bacon, cheese and something else sauce. Very yummy.

After a quick bit of Internet scanning, it turns out that the dish itself is called “Kartoffel Latkes”, literally “potato pancake”. In fact, just googling “kartoffel”, which is the German word for “potato”, results in quite a long list of varying potato-based foods. Lots of recipes and no actual restaurant that makes the stuff in the Cape Town or Johannesburg areas but the search shall remain open until an establishment is discovered.

Anyway, foods aside, this year’s festival seemed a lot quieter and warmer than previous ones I’d been to. I’ve, of course, been missing the Grahamstown Festival since 2009 and a lot changes in four years, weather patterns inclusive. It was nice to be back in the small town, engaging with arty types and the random animals that peruse Frontier Country.

But let’s not get too off-track. I still have some reviews to get off my chest, so here’s the rest of my short commentaries on what I’ve watched. If you missed the first batch, read them here.

While idly walking the streets with Tarryn, my Encore! co-actress, in search of food and social life, we met with Marcel Oudejans, a friend of Tarryn’s. He was just about to perform and spontaneously comped us in. And who are we to say nay to a free show.

Marcel is a magician, as the title of his show may have indicated, working in comedy and trickery to dazzle and delight his audiences. This was his first time in Grahamstown as well as first time working at the Festival. A very successful first timer, I’d add, as he pulled in an average of 50 people per show!

The show itself was delightfully entertaining as magic shows go. I enjoyed his pleasant demeanor and engagement with the audience, drawing smiles, laughs and exclamations of disbelief almost continuously through his performance. I, for one, throughly enjoyed the illusions which were subtle and made strong use of props.

A couple of nights later, I had shared a drink with Marcel when he spontaneously performed some tricks at our table, wowing our neighbours and securing future audiences to his show. His table tricks were as admirable to impressionable little me as his main performance. Definitely a show to recommend.

The following morning opened with another Buckland performance in Hoss, a humourous, semi-physical piece on a ghostly vigilante and his hoss … er, horse. Great performances from the UBOM! East Cape Drama Company, sadly also, among the last since the company has been forced to close due to insufficient funding.

The piece itself was humourous and captivating, with the actors shapeshifting between key characters and ensemble, elegantly using props and physical movements to simulate a fast-paced Western-styled tale based on the Eastern Cape Frontier mythologies and history. It is perhaps among the first, if not only, play that capitalises on the Frontier Country tales as the Americans have capitalised on their Wild West. It would be nice to see more of these stories see the light in as fresh and comedic (because I just love me some laughs) a manner as Hoss delivers.

Thom Pain (based on nothing)

Because I’d heard many people touting the greatness of Thom Pain, I decided to go see it. And am sorely disappointed that, as a result, I’d missed some other great piece of entertainment.

Thom Pain is well delivered, has some interesting moments, and is largely forgettable. It is what I would class as stand-up drama, with Albert Pretorius seemingly idly and spontaneously having an existential dialogue with himself, and occasionally pretending to engage with the audience before swiftly moving on to another rant. I found it mostly boring with the occasional gems that struck a cord in the moment but, now, remain forgotten.

It is interesting that a friend later commented on how much she loved the piece, citing the fact that Thom discusses topics that many people can relate to. If, however, as an audience member, one has already moved beyond the issues that Thom is still dealing with, the show will come across as trite and boring. This is perhaps an important observation to hold in mind for most shows. The show’s appeal is directly linked to how much the targeted audiences relate to the material. In the case of Thom Pain, I clearly was not targeted.

Continuing the theme of standup-drama, Running on Empty was more appealing to me mainly because of the added gimmick: the actress spends the entire hour of performance running on a treadmill. The story was also more to my liking, cross-linking the character’s need to have the perfect body – commenting on society’s view of what is in fact perfect in terms of health and physicality – with a tragic tale from character’s history which, in a sense, defines her need to look perfect.

From my physical theatre love, the actress was a pleasure to watch as she walked, ran, jumped and twirled herself around the treadmill. Penned and performed by Nicola Hanekom, the show is actually a little over an hour which is a long time for the depth of drama that it goes into. I felt severely mentally tired by the end of it. Still, it was a worthwhile experience.

Going straight from one existential drama to another is never a good idea. My head did bob in tiredness through much of this performance.

Drive With Me follows the (again, somewhat tragic) story of a woman’s solo trip from Cape Town to Grahamstown for the National Arts Festival, exploring her own internal life journey, with interesting and insightful observations.

The story is told through the actor, Megan Choritz, as a presentation at ThinkFest, alternating between a narrative of the drive and the actual drive. It is a warm, slightly funny and sad tale.
Unfortunately, I was rather drama’d out by this stage so I lost a lot of what was being said with my attention being grabbed mostly by the visuals in the presentation. At least, when they animated.

The Epicene Butcher and Other Stories for Consenting Adults

This was a very charming and unique form of theatre presenting stories to the audience in the form of painted images, narrated/performed by actress, Jemma Kahn. It is presented as an old Japanese form of storytelling, which was very prevalent in Japan about a century ago, but is certainly new to modern South Africa. The entire set looked like a kitsch fortune-teller’s tent complete with waving money-cat and weird, blue balloon cows. A second actress, identified as Chalk Girl and played by Klara Van Wyk, who silently engages with the audience through sultry looks and poses during the pre-set and between stories, is a nice touch, essentially creating a theatrical segue from tale to tale.

I’ve enjoyed watching James Cairn ever since Rat which I saw back in 2005. Dirt was no exception. The man effortlessly shifts between a range of characters creating an entire tapestry of players before our eyes.
Dirt follows the road trip of three friends and a dog from Johannesburg to Cape Town to the funeral of a fourth friend. It is a beautiful blend of intelligent humour and poignant drama, as the friends unpack their judgements, jealousy and respect for each other during the long drive. Another worthwhile performance to catch.
Unfortunately, I didn’t catch any of James’ other shows at this Fest but I’ve heard good reports on the others and hope to catch runs of them somewhere in SA.

This was my first exposure to Angel Campey, standup comedian. And, yes, as the title of her show says, her name really is Angel. One of the few female stand-ups in South Africa, she’s an amusing young lady, with a decent arsenal of jokes and improv ability to keep the crowd laughing. I was, however, mildly perturbed by her racist comments during her Korean skit; it seems that while she’s quite comfortable with black and white humans, it comes across from her jokes that Orientals are a sub-species. Whether that was for comic effect or a real view, I can’t say. Other than that, I laughed out loud at a good number of her jokes and think she did a stellar performance with a smallish crowd.

The last show that I managed to squeeze in was The Unexpected Man, a two-handed drama that takes place entirely in a train car. Zanne Solomon and Shaun Acker deliver strong performances as the two strangers, an author and his rather shy fan. While not a big fan of the ending which leaves one wanting, I found the show quite captivating. The script, written by Yasmina Reza, is quite strong and these two actors did it a world of justice. This is another performance that I would recommend viewing if the production decides to extend their run beyond Grahamstown.

And, that’s it. Those are all the shows I watched. I’m disappointed that I didn’t fit in a few more but at the rate that I was already passing out in the ones I’d actually made it to, squeezing in more would not have been a worthwhile idea. Hopefully, I will get to see some suggested shows as they tour tho. For now, I must rest. It feels like I may have contracted a bug on my way out of the Easter Cape. Cough cough.