No prize for second best

This is the greatest moment of your life and you’re missing it! 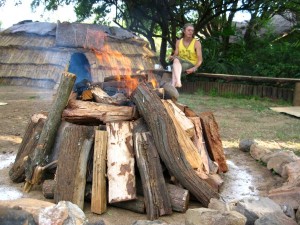 Ni Nixiwaka (aka Niyan) at the Jazz Farm (www.jazzfarm.co.za)

A wall of hot steam hit me full force in the darkness. My body trembled in the heat. My breath felt short. I coughed as the steam filled my lungs.
I wanted out.

Three people had already left the sweat lodge, the heat unbearable. With them gone, there was a bit more space to stretch out. I lay back, attempting to find the cooler air at floor level. A pointless mission. Still, even though the lower air was perhaps the same temperature, it at least held less water vapour than its higher relatives.

Over the last two weeks, I watched Fight Club twice. As I closed my eyes, cringing in the heat, Durden’s voice reverberated (really, it did; I could feel the words bounce off my skull) in my head, “This is the greatest moment of your life. Don’t shut this out.” My recent tantra training echoed the same sentiment. “Delve into the discomfort. Then say, ‘Give me more.'”

Niyan (now known as Ni Nixiwaka), our facilitator, told us stories of Sweats in South America that go on for eighteen hours. Everyone sits upright for the full duration, their neighbours prodding anyone who starts slacking. The girl to my right leaned over to me. “Don’t you do that to me,” she said jovially. This was her first sweat, I think. This was my third. Not that that makes it any easier. I smiled in the darkness.

Niyan himself was commenting on how he was struggling with this evening’s session. And he’s been doing this for more than seventeen years.

I remained conscious, my eyes open. I couldn’t keep myself sitting upright. It was too hot. I had to lay on the ground. But I didn’t leave. We were in there for close to two hours I would later learn. A far cry from eighteen. How could I manage much more of this? I could have let my mind wander, I could have let myself focus on something more pleasant, numbing my sense. I can do that. I’ve done that before. But what would it achieve? What would it prove?

Niyan started singing, giving us something to focus on, while still being present. It was our final leg. All the hot stones were in the centre of the hut. One final push and we’d be through. It sounded like most people were still sitting upright, judging from their singing. I didn’t join in for a long while, wrestling with my craving to blank out and the need to stay here.

Eventually, I pushed myself up. It’s amazing how much weight hot steam accumulates over time. Either that or my muscles had atrophied in the past hour. With some effort, I sat up and stared at the rocks, finding a focus, resolute that I will not flake. The rocks glowed silently. Comfortingly.