A Wee Bit Of A Downer

Oh my God! I burnt myself with Glühwein!8 min read 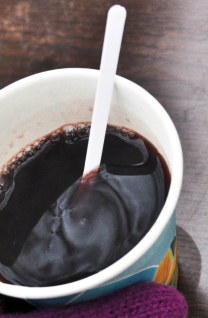 So the story goes as follows. I picked up a take-away cup of Glühwein on my way back to digs. Yes, a take-away Glühwein. It’s totally a thing. A warm thing. Served to me in a polystyrene cup by a French clown. In fact, the purchase also afforded me the chance to glance upon a rabbit’s stuffed penis which was, until the point of viewing, itself covered by a polystyrene cup. This is of no consequence to this tale except that it happened. And I was entertained.

Replacing the cup on the exposed penis, and being the polite young lad that I am (well, most times, I would think), I thanked the man in the colourful wig who spoke with a French accent, complimented the toy bunny on his manhood, and raising my throwaway cup in cheer, I continued on my journey. It was at this point that I took a sip of the spiced, mulled wined, burnt my mouth, and burst into a coughing fit, which only caused more wine to spill down my hands as passersby idly passed by.

And so, hot wine dripping down my arms, my tongue slightly blistered, I returned to the place I’ve come to call home during the Festival run of Encore!

None of this is really of interest to anyone, I imagine, but it is, for me, an amusing story that I felt urged to share…on my blog at any rate, not through a shortened status report through the more popular social medias.

And now that that is out of the way, I shall continue my report on this year’s festival by providing some concise reviews of the few shows I watched. It would be useful to note that I am not qualified as a criteria…a critter…a criticising person and the views presented here are solely my own and based purely on my sense of what the heck satisfies my personal sense of entertainment. So, that said, I will present the shows in the order that I watched them.

We started our festival viewing with Rob Murray’s Crazy in Love sometime between Thursday and Sunday. I honestly can’t remember when. Nor can I see the times on the daily diary sitting next to me. I’m obviously that kind of tired.

The show was pleasing to watch. I’ve heard say, and I would agree, that the story was not the best and did have a very arbitrary ending. However, I have seen sufficiently few shows featuring Andrew Buckland and Liesl de Kock, that I am still fascinated by just watching them do stuff, story aside. Whenever I was jolted out of the tale, the piece transformed into a master class with me just appreciating and learning what I could by merely watching these two performers express their art.

I am also still amazed at the use of the various props in Rob Murray shows and the manner in which they transform into and are used in so many different and varied, urhm, ways. In short, I thoroughly loved watching the piece, the actors and their monstrous, mutant prop.

After a period of house arrest rehearsing for our show, we finally had a chance to sample the rest of the festival four days in. I started with the last show of Nadine Joseph’s interpretive dance, for.GIVEn.

The piece was certainly interesting and energetic, and Nadine was a pleasure to watch. However, it wasn’t my slice of cake. I guess I’m more particular to contemporary dance pieces. Being an ex-dancer myself, I normally judge the level of a dance piece by how much I want to be up on stage engaging with the dancers. I didn’t feel that desire with Nadine’s piece. For me, it lacked cohesion from movement to movement and while the energy was high, there wasn’t a discernable emotional tie to the movement.

Still, it was engaging and enjoyable. It was also, it turns out, the only bit of dance I wound up watching this festival.

Since I started coming to Fest back in 2003, I’ve been watching the career trajectory of Rob van Vuuren. I felt it would be a worthwhile endeavour to watch his standup show WhatWhat, if only for some light entertainment.

I did marvel at the way the man is able to manipulate the mass crowd. I found his show amusing but not entirely laugh-a-minute. As with the previous show, I pictured myself doing the performance and concluded that, while I could certainly pull off a lot of what Rob was delivering, at least in the opening portion of his show, nobody would laugh. Partly, I don’t currently have the energy that Rob projects. Partly, I certainly don’t have the “celebrity wow” factor. The man just needs to pull a face and fart and the audience will laugh hysterically.

That’s not a negative crit, that’s an observation. And a bit of jealously that I don’t yet wield the same power. Mwahahahuh!

Material-wise, WhatWhat is funny and insightful and has some good gems, some of which I felt went over the general audience’s head. Not quite laugh-a-minute for me but certainly worth the ticket price.

Lenny and The Wasteland

On my fellow actress’ advice, I went to see Lenny and am really glad that I did. This particular show and story really connected with me. The thing with any art form, be it theatre, music, film or the myriad of other expressions out there, is that it is an emotional expression. And audiences are captivated by the emotions that they connect with the piece.

The companionship between Lenny and Newt really struck a cord with me, and that heartstring plucked, I was enraptured with the piece enough to give it a standing clap come curtain down, which, trust me, I do not dol out easily.

The performance was well portrayed by the two main actors. The third actor’s delivery, I felt, wasn’t quite up to spec. She had the physicality down but her facial and vocal presentation was lacking. It wasn’t enough to ruin my appreciation of the piece as a whole though.

I also rather enjoyed the combination of shadow puppetry, video media and the live action. I am a bit of a sucker for mixed media pieces.

Of the few shows that I did see at this year’s festival, Lenny is one the even fewer that I’d been recommending to everyone.

I finished off the first night of show-watching freedom with The Jittery Citizens, an improvised comedy show. I have worked with most of the actors before in various other performances which may make me a little biassed toward them. Still the crowd reacted as well as I did to their quick wit, improvised characterisations, funny accents and general on-their-feet acting.

I managed to catch two of their performances over the week which, of course, are never the same, with varying audience input and different actors every night. Both shows were intensely hilarious and entertaining, and this is another show that I’d been recommending fervently. Catch them in Johannesburg when you have the chance.

The only bit of proper physical theatre that I watched this fest was nicely peppered with humour, mild puppet play, and solid performances. The cast were very entertaining to watch, with strong physical performances and great comic timing.

I can’t really say much more about this piece. It was rather early in the morning and I was still a little shell-shocked to be honest. All in all, an enjoyable bit of theatre.

This was a really good piece of comedy. Unfortunately, my body decided it wasn’t coping with this day after we’d just spent some time marketing in the Village Green and I was having severe narcoleptic attacks throughout the performance.

Which is rather unfortunate because, despite wanting to fall asleep, I was really enjoying the play. It was funny, well scripted and acted. At least, the parts I was able to pay attention to certainly were.

Like a few fellow actors, I’m sure, I could relate to some of what the characters were going through just trying to get by with a little shred of dignity. In all fairness, this is also a show I should have been recommending and probably would have if I’d been awake enough to remember it 😛

Okay. Now I’m tired of writing. The effects of the then warm Glühwein have worn off and I might just disappear into the comforting caresses of my fluffy blanket now. A report of the remaining handful of shows shall, should you be interested, be presented later. Perhaps tomorrow. Who knows? Not this sleepy cherub most certainly.