Addicted to Helping my Self 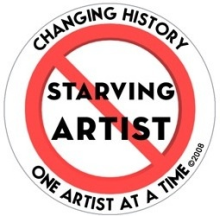 In general, actors prostitute themselves more than any other professional. In an industry where there’s more people flaunting their talents than actual roles that need filling, it’s easy to settle for the payless job just so one can get one’s face out there.

And sometimes making the sacrifice pays off but, unfortunately, there’s never a guarantee.

If there’s one thing I’ve learned in the past year, it’s that my skills and time as a performer are as valuable as any artisan. You’ll not find an engineer do a job solely for the opportunity to add it to his resume. Nope, even if the pay is substandard, our man wants to be able to pay his petrol, rent and eat at least once a day.

Actors are willing to forego payment for a promise. It’s the dreamer in us. We want to believe that this is our break. Sure, we’ll struggle to fill the tank this month but once that movie makes it big, producers will be begging us to work for them.

Welcome to reality. Unless the independent film-maker that’s hired us has a plan to make his or her feature work commercially, don’t assume that anybody outside of your immediate family and friend circles are going to see your “big break”. And, even if your show does get some extra screentime, unless it well and truly makes it big and your role is talked about in the inner industry circles for months to come, don’t give up your dayjob if you have one (And, let’s face it, if you’re not acting for money, you probably do).

I was in that same boat. I wouldn’t say I was naïve enough to believe that every non-paying gig would be the one. None of us are. Mostly we just do free shows to pad the resume. But continually selling oneself out isn’t going to ensure one’s success as an actor.

That comes from firstly respecting yourself and your profession enough to turn down jobs that aren’t up to standard. Actually, firstly you need to decide on a standard. What’s the minimum wage you’re willing to work for? Will your travel and food expenses be covered at the very least? What type of role will you settle for? How important should your character be and how much screentime will make it worth your while?

Once you know what you’re willing to work for, you can determine whether a gig is worth it or not. Paying gigs don’t always have to pay you monetarily although, in my opinion, they should ensure your travel is taken of. You will, of course, have to decide how worthwhile your involvement is on a per-gig basis. The most important thing is that you brand yourself as a talent. Even if they aren’t paying you a salary, if the particular production has a well thought-out marketing structure and can show you that they’re doing whatever it takes to spread their product far and wide and/or show a profit, they may be worth the risk.

No production can ever guarantee a positive return but the ones that just go for the shoot-and-hope-someone-will-buy method should be avoided at all costs. A movie, a series, a play production, they’re all business projects. Creative projects as well, yes, but ultimately, they’re need to be commercially viable to ensure their continued existence. If you’re on a production that doesn’t have at least one business minded thinker on board or substantial financial backing, it’d probably be a safe enough bet that you’re going to have to fund your involvement with them, which rather defeats the purpose of working, doesn’t it?

Unless, you’re one of those weirdos that gets a kick out of paying to be in a job. 😛

I don’t mean to suck the passion out of your artistic nature. Just be wary of the productions you choose to do. Follow your passion but balance it out with the essentials. If you want to be an actor, first establish yourself as best you can in paying productions. If you want to be a waiter by day and a hobby performer by night, that’s great. Just make that your decision. If acting is your true passion and you want to make a living out of it, then you need to develop a few extra skills as a marketer because you’re going into the business of yourself and, unless you can find somebody who has branding and marketing skills and your best interests at heart, you’re going to have to do it yourself. At least, until you can afford to hire somebody to do it for you.

I realise that this is a harsh standpoint and chances are most creative minds would rebel against it. It is the difference, however, between being a starving artist and a well-fed one. And, ultimately, the choice is always yours.