When is Your Someday?

Survival of the one with the most stamina 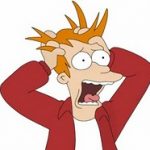 The rumour is that the older one gets, the less sleep one needs. Which may be why the universe reckons granting me with a whole four hours of the stuff is more than adequate. The bastard!

Of course, it is silly of me to blame an unbounded entity made up mostly of empty space for my poor sleeping circumstances but I have to point the finger somewhere, right? The alternative is bending that finger back at myself and that’s just gonna break it off and nobody wants to see that happen. It gets messy and there’s lots of screaming and people start yelling because they can’t sleep over the racket. That’s the road to chaos, it is.

Besides, the universe is a good scapegoat; It has the decency to accept blame without complaint.

Anyway, needing less sleep, I think, is just an excuse that older folk make because they just don’t have the time to sleep. Because, you know, I’ve watched other creatures, like dogs and cats, in their latter years. They tend to sleep all the time!

It’s the juveniles that boisterously jump on your bed at the stroke of sunrise. The more mature fellows just pull their paws over their eyes and do what they do best. And don’t think for a second that you should change that. Let sleeping dogs lie didn’t get to be a well-known phrase because waking them was good for your health. No, no, no, no. Crabby, sleep-deprived animals (that includes humans) are not a pleasure to hold company with.

Trust me. I’ve had four hours of sleep. If I didn’t know better, I’d be off to the Woolies to get a fresh supply of tampons.

All I ask, at this very moment in time, is that I am able to sleep when I’m sleepy and not awaken until I am refreshed. On that closing note, anybody have a spare beach villa that I might squat in for a couple of weeks?